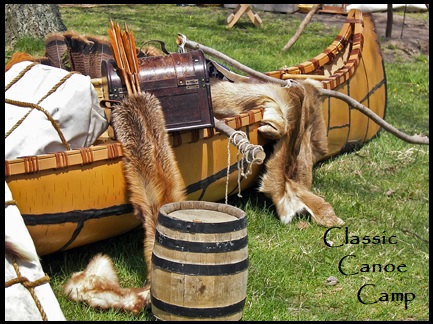 ”Give Me Of Your Bark, O Birch-Tree”  – Henry Wadsworth Longfellow

The Birch Bark Canoe has been called one of the greatest gifts of the first peoples to all those who came after.  Beautiful, simple in design, yet functional and practical,  the canoe made it possible for early Europeans to explore and discover the interior of the North American Continent.

With millions of lakes and rivers, the first peoples of North America realized that the best way to travel, trade, and hunt, was by paddling a bark canoe.  Dense forests, ravenous insects, rough terrain, and packing everything on your back, made it very difficult to travel through the summer season.  Birch bark canoes were the answer. 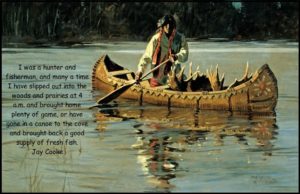 As European explorers began to explore and exploit the vast new world, it became immediately obvious that they would have to adopt the canoe, which became a common link between the enormously different cultures of Europe and North America.

The ingenious design, the ease at which it could be crafted from materials at hand, and the flexibility to change and adapt the canoe, made the birch bark canoe the obvious choice for the Fur Traders who required a method to transport furs and equipment across the vast landscape.  When the trade in fur demanded an increase in size and carrying capacity, canoes became as large as thirty-six feet long with up to seventeen paddlers.  These big canoes could carry more than four tons of goods and provisions.  A grand upgrade from the original canoes that often carried one family and the few possessions that nomadic people needed to survive.

By the 1820’s, large plank boats and steam ships were beginning to move people and goods along the major rivers of Canada and America.  Canoes were still effectively used in the backwoods on shallow streams and rivers, and where numerous portages were commonplace.  In 1836, the “first” canoeing regatta took place in Halifax, Canada.  This sparked the beginning of canoes being used as pleasure crafts and to help to renew oneself and enhance the wilderness experience.

Canoeing as an activity is no longer just for the trapper, hunter, or wilderness explorer. Instead, it is enjoyed by people of all ages around the world and it is now fully immersed into sports, recreation, and Olympic competitions.  Canada is particularly proud of their canoeing heritage and it is permanently fixed into our Canadian identity and ideals.

Modern bushcrafters have been helping to grow the historical perspective of canoeing by offering many custom canoe bushcraft courses and expeditions.  Bushcrafting and Canoeing combine together to provide a terrific classroom for outdoor enthusiasts.  We are proud to be able to offer a Theme Camp dedicated to the fantastic, historical era of Classic Canoe Camping.  We encourage all participants to share information and display or demonstrate any classic canoe gear that you have.  Canoes, paddles, cookware, camp gear, canvas tents, trade goods, and anything that celebrates traditional canoeing is welcome.

Note:  The Traditional Canoe theme camp is currently looking for a program sponsor as well as a financial sponsor. If you are interested in providing some of the above, and would like an opportunity to showcase your talents and/or wares, please contact us.