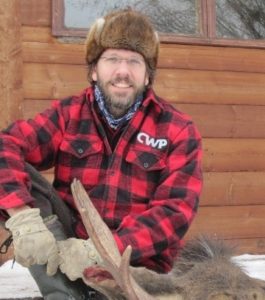 As a teenager, Al was enrolled in the Junior Forest Warden program, a forestry and outdoor youth program delivered by volunteers with an interest in outdoor education. This was where “the veil” was lifted by Mors Kochanski and many others, and began lifelong friendships and lifelong learning as a “student of the woods”. Through 25 years of program delivery and administration as a volunteer, Al attempted to return the gift he received in those formative years.

Back country adventures both as soloist and as a part of a group became a regular occurrence for Al, gaining skills and experience in the woods, and letting his passion be his guide. The idea of feeding himself and adventure lead him to recreational hunting. Wanting to “build things” lead him to carpentry and knife making. Loving loud noises lead him to a passion for firearms (?). All of this was made easier by choosing to make a home in the north Peace River country, in the little town of Manning.

Within his sphere, Al has been sought after as a Wilderness Skills Instructor to deliver programming to the youth programs, public schools, Metis Region and charter aircraft industry with a focus on the hard bush skills. Mixed in with the skill development (when your hands are busy) is where he weaves in the philosophies of sustainability, stewardship, survival, volunteerism, and whatever else you get him started on…

In 2003, Al started a big game hunting company called Moose Country Outfitting, organizing and guiding hunts for people from around the world on various species in Alberta’s Northwest. While hunting is often singularly focused, Al sees these trips as opportunities for teaching, and sharing with clients as they enjoy a wilderness hunting adventure in his element.

A Forest Technologist by trade since graduation in 1992, Al currently works full time as a Woodlands Operations Supervisor with a West Fraser sawmill, as well as their Indigenous Relations Coordinator.

With little spare time, Al just makes sure that he has a good time each day. His claim to fame is probably his bannock recipe, and his favourite annual event is the pilgrimage to Karamat, and the Ratroot Rendezvous each August where he gets to visit with the “names to know” in the bushcraft movement of Alberta and beyond.