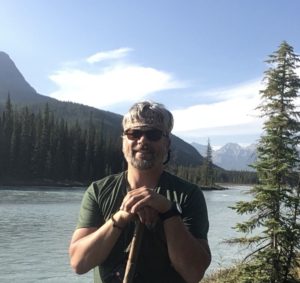 Born and raised in the Rocky Mountains of Banff, Alberta, Alex was introduced to the world outside by his parents and uncle; hiking, hunting, fishing, skiing, camping, canoeing and playing in the woods were part of Alex’s early formative years.  Nearly every positive childhood memory he has is related in some way to being out in Nature.

Along the way, alpine ski racing and moreover, a love for rugby was discovered and this took over much of Alex’s time and attention.   He played rugby throughout his school years, for 12 years at the club level and also at the national level in the Rugby Canada Super League.

Alex holds a certificate as a Competition Introduction Level Coach with Rugby Canada, has coached at the Senior Men’s club level and has been a volunteer coach at Jasper Junior/Senior High School for more than 10 years.

Having spent most winters on alpine skis since the age of 4, Alex also had a short, yet forgettable ski, racing career.   This passion for alpine skiing greatly assisted him while serving 10 years as the President of the Jasper Ski Club and also coaching at the U14 level.

With his amazing wife, and two children he calls Jasper, Alberta home.  Alex has worked in the Tourism, Hospitality and Lift Industries for most of his life.  He co-owned Jasper Tramway (since renamed Jasper Sky Tram) serving as the company’s President (1995-2012) and General Manager (2001-2012).   Having turned a “career page”, Alex is now able to dive deeper into his lifelong passion for the outdoors.

Over the years, Alex has continued to enjoy Nature and the outdoors in part through cherished hunting and fishing trips with friends, camping trips with family, bird hunting with his dog or quite often out alone.  Using skills and learning as much as possible through different resources along the way.

Alex has undertaken more formal studies, through Frontier Bushcraft’s (Paul Kirtley) Online Wilderness Bushcraft Course and hands on with Karamat Wilderness Ways.  These courses have greatly accelerated his absorption of new skills and are solidifying those already learned.  His continuing education in this field has greatly increased his awareness and appreciation for those that have gone before.