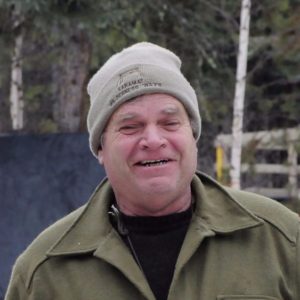 I was born in Edmonton, Alberta on December 17, 1958 to Dutch immigrants from the Netherlands. As a youngster I had to walk to school which gave me lots of time to wander in the woods, often late getting to school and way late home.

I met my wife while working for her father at his plastering business and we would go random camping in the mountains as often as possible. Married the boss’s daughter in April of 1979 and have 3 kids who all love the outdoors. We have 4 grandkids who enjoy coming to our place and playing in the woods.

My oldest son joined Scouts and I soon became a Scout Leader. Our scout troop would go camping every month. They all enjoyed camping, cooking over the fire, natural crafting, and everything to do with the outdoors.  All 3 of my children were involved with scouts and were also involved with outdoor education while in junior high school. I

While volunteering at the CJ93 Scouting Jamboree in Kananaskis, Alberta,  I met Mors Kochanski and my life changed forever. I soon took my first winter course, then a summer course and just kept on going back to Mors’ courses. Mors was having trouble filling his classes so in 1997 I talked to him about running the courses under Karamat Wilderness Ways’ banner at our place and hiring him to come in and do the instruction. Here we are many years later and still running courses.

After meeting Mors in 93. I went to Northern Lights Primitive Skills Gathering in Slocan, BC and learnt how to tan deer hides from Matt and Molly. I enjoyed tanning and soon got asked to tan hides for the Royal Alberta Museum in Edmonton. We built them a 22′ moose hide teepee along with 12 other replicas.  We started a gathering called the Rat Root Rendezvous where we promote the sharing of bushcraft, wilderness living and survival.

Mors had his small books (very small) and we increased the size of them and published 17 different titles. We decided to produce a set of videos on plants, then people were asking for skills videos so we did a few of them. We started our YouTube channel around this time and have received very positive comments. I have been to and instructed at Rabbitstick, Wintercount, Winter Camping Symposium, Northern Lights primitive skills gathering, Sundog, Frostbite, and Junior Forest Wardens gatherings.