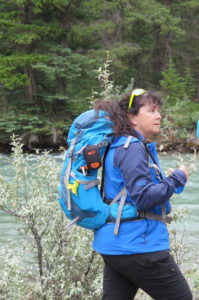 Brenda (Cree/Iroquois Métis) was born and raised in the Rockies in Jasper National Park and is pleased to follow her lineage as a traditional Métis guide from the Kwarakwante of Jasper. Learning through research and talking with elders, traditions, which are a part of her heritage, have become a pleasure for her to share with others.

Brenda has spent the last 14 years in tourism and has served on Aboriginal Tourism Advisory Boards for the Minister of Tourism Parks and Recreation in 2008 as well as for Travel Alberta in 2006. In addition, Brenda has been engaged in Aboriginal Tourism since 1998 and was an active member of Niitsitappi (before being taken over by Travel Alberta).

Some of Brenda’s Accomplishments:

Restructured and ran the Métis interpretive centre at the Canadian National Parks Rocky Mountain House 2006.
Trained guides and consulted for the Métis heritage site “Métis Crossing” for the six years.
Worked closely with Jasper National Parks introducing culturally based programs, which is at present an ongoing project.
Recipient of several prestigious awards for her work in using her company both in the entrepreneurial spirit and in educating the public about Métis culture. One of these awards was the Aboriginal Woman Entrepreneur Award of Distinction presented from the Alberta Chamber of Commerce.
Awarded the Esquao Award from the Institute for the Advancement of Aboriginal Women (IAAW). The award was in the Health, Medicine and Culture category, for the promotion of those qualities through the client based activities provided by Mahikan Trails Inc.
In 2004, Métis Nation of Alberta Region III awarded her the Métis Entrepreneur of the Year.
Took part in several film documentaries and one television series: Mahikan Trails was presented on Profiles of Success on Aboriginal People’s Television Network.
Tomiuk Productions filmed Mahikan Trails in a documentary/training video to be used in a Lakeland College training course for Adventure Tourism.
Mahikan Trails was showcased as one of the Adventure Partners in the Aboriginal Tourism Sector.
As part of Alberta Economic Development, Brenda was also filmed with the Story Tellers documentary series on being an Aboriginal Woman in Business.
In 2006 Brenda was filmed in a TV series called Fish Out of Water, featuring Métis heritage, culture and skills.
In 2010 Brenda hosted her own TV show called “The Hookup” again featuring her heritage and culture. The show took home the prestigious “Rosie” award in Alberta.