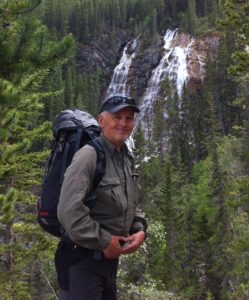 Dave taught his first official survival lesson while serving in the British Army back in 1984; initially trained as a Combat Engineer he also gained extensive training as a Mountain Leader where he led groups of soldiers in numerous countries from Africa to Europe, Central America and the USA.

On retirement from the Army Dave married his wife Brenda and immigrated to Canada. On arrival to Canada he was hired as a civilian instructor, at the prestigious British Army Adventure Training Centre in the Canadian Rocky Mountains. There he instructed on several mountain-training programs instructing both British and Canadian forces, teaching winter and summer activities for 8 years.

A chance meeting led Dave to start a long apprenticeship with Mors Kochanski where, after twelve years, Mors presented Dave with a certificate acknowledging him as a ‘Wilderness Living skills and Survival instructor.’ Dave states this is the most prized certificate he owns that he has gained for outdoor excellence.

Pushing the Canadian experience he gained skills as a dog sled and ski joring instructor; then cave guide where he has also served as a member of the Alberta Cave rescue team.

His experience gained in dogsledding, and ski joring, led him to compete in the Ski Jor World Championships in Fairbanks, Alaska, in 2001, as a member of the British National Team.

Dave holds various guiding qualifications; with the Wilderness Guides Association (WGA), and the Association of Canadian Mountain Guides (ACMG), as a Hiking and snowshoe guide.

He currently works with his wife’s company ‘Mahikan Trails’ teaching Indigenous skills of the land.

Dave’s skills have been used by the world of entertainment where he has worked on several TV productions, and one Walt Disney film; and more recently as a survival consultant on the History Channel’s ‘Alone’ show TV series.

He has written several articles for local and International outdoor magazines, and is currently working on a survival book where he is echoing on the skills, and lessons, he has learned as a survival instructor, and guide.