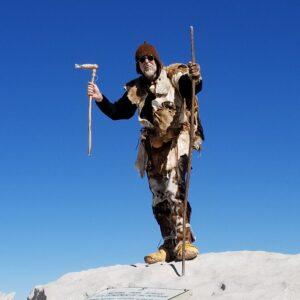 I grew up in Lake Arrowhead in the San Bernardino National forest in Southern California. This is where I cut my teeth and tried to learn as much as I could about the Mountains and surrounding Deserts expanding my exploration in my High School years to the Eastern Sierra. From my first bowdrill coal in elementary school to getting small features in the local paper and TV station as well as later, a spot as a citizen volunteer trainee with the San Bernardino county sheriff’s search and rescue team and participated in follow ups on the Jared Negrette Search…
In 1992 I moved to San Antonio Texas to perform at a theme park with my 50s Rockabilly band. We played 7 shows a day for 7 years, and all free time was spent “in the woods” learning about prehistoric Texas, hiking and producing Ancestral tools…
The park laid off most of the entertainment and I went to work with a arborist as well as doing tree work for several local properties and resorts.  I needed a break and took a job with a outdoor retail shop where I became the Military Liaison providing all civilian off the shelf (COTS) gear to the many selection pipelines in the San Antonio area.
After Supplying the local SERE Specialist (Survival Evasion Resistance and Escape) cadre COTS Gear, I was invited to the training area to help update and bring in some new equipment since the camp gear was dated. After some impromptu Primitive Survival demos around the Instructors camp fire circle, I assisted in the training scenario and was asked back by the SERE Cadre superintendent.
My participation was O-kayed all the way up and I was soon on the payroll. I worked with the Brooks School of Aerospace Medicine USAF SERE program for 10 years and was made a certified SME…this is where I learned of Tom Lutyens,  since most of the Cadre had worked with or had been trained by him.
A few years after the Brooks school closed, I was invited as a guest Survival instructor at 88 tactical in Nebraska that’s when I met Tom.
The SERE Guys used to say if we ever meet, the Earth may be knocked of its axis lol.
I’ve since met up with Tom at the SERE Reunion at Fairchild AFB in Spokane and worked with him in the field as a Guest instructor for the SERE support staff.
For my 50th birthday I wanted to do something neat, and years ago I came up with the idea to make Otzi styled gear and climb Mount Whitney.
Well as I got closer it all fell together there was support and donations for travel I spent all free time when I was not at work on the chainsaw making gear for the trip…the time came and almost the exact altitude of the Otzi find in the Italian alps we were shook off the Mountain by a raging blizzard…the lesson…to be continued is better than the end…I gave it another go three years latter and summited the 14,505 foot peak the highest point in the contiguous US.