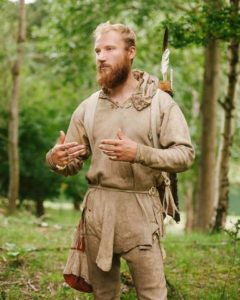 Nature is the dominant theme in Thijmen’s life. It has been for as long as he can remember.

When he was still a young boy, his father used to take him out on a regular basis to watch the wildlife, tend to bees and to find an altogether sense of serenity in nature. During his father’s twelve-year absence, Thijmen tended to find exactly that in forests everywhere.

Thijmen grew up amongst hunters, nature lovers, bee keepers en many other nature oriented enthusiasts. At the tender age of seventeen, Thijmen moved out being already well groomed to meet nature’s tough demands.

It was at this age he started developing his know-how of nature by his own initiative. He stocked up on nature themed books, went out to forests with friends and acquaintances and experimented with all kinds of building shelter, crafting rope, foraging for food en gaining an overall experience of living in the wild. He not only went by the
modern equipment for surviving in such environments, but indulged in learning and adapting the ancient ways of survival. It is then he first coined the term ‘bushcraft’ among friends. Little did anyone know that soon hereafter, at the age of twenty, Thijmen would not only be scurrying amongst trees and bushes for pure fun. He would transform his passion into something that has become more than learning. It has become teaching. His knowledge of living by nature has become so abundant; he’s applied himself to showing others the craft and benefits of the ways of old. The ways that still apply today.

Surviving alone or with a single companion for over two weeks, with no other equipment than a knife, has taught him many things. Not in the least that he found his place. It isn’t where walls of brick and stone keep out the conditions that weary most other people. It is those places where you feel small and one with nature. Where he doesn’t feel like a citizen but a human being.

“If you’ve never done it before, it’s hard to imagine,” he says, “I became conscious.”

In 2010 he founded a company together with the owner of the internet-based Dutch Bushcraft forum and they called it Bushcraft International. The company provides courses on many bushcraft and survival related scenarios. Thijmen still works as an instructor for this company today. After short stints with Moosetrail Bushcrafts and other companies of the sort, Bushcraft International picked up. And so did Thijmen’s spirit.

Over the past four years he has seen many European landscapes and designed courses for each different environment and scenario. Bushcraft International is associated with Other International Bushcraft schools and a former instructor of Woodlohr.

After That, it was all to modern and he wants a new style of direction and courses and started Living by Nature, designed Year courses.

He’s adamant about everything he’s doing in nature and for the company. He intends to let people get acquainted with ‘the bushcraft experience’ and to realize what it’s like to forego many ways of modern civilization. “People ask me frequently how I started in the bushcraft world and what makes me a ‘bushcrafter’,” he says, “I reply by saying I was raised that way.”